Walkypedia Wiki
Register
Don't have an account?
Sign In
Advertisement
in: It's Walky!, Roomies!, Dumbing of Age,
and 4 more

Alan Rees is a character in the Walkyverse and a minor character in Dumbing of Age. In both continuities, he acts as an instructor to the main cast, though his Dumbiverse incarnation kind of got the short end of the stick on that front.

Alan Rees is SEMME's resident Alien expert. In this role, he has the unenviable job of training Joyce Brown, Walky, Joe, and presumably every other active SEMME agent.

Alan is actually an Alien in disguise as a human. He works with SEMME, and is a very rare "good" alien.

For most of It's Walky!, Alan remained something of an enigma. He seems to have some sort of prior relationship with The Cheese, and visited Joyce Brown and Sal Walkerton disguised as the "Man in Black". He may also have been present when Walky and Joyce first met.

Alan was largely a background figure until Year Zero, when he came to the forefront due to being one of the only SEMME agents still conscious. He was held hostage by two of the Head Alien's flunkies, along with Professor Doc, to force Big Boss's hand. Once freed, he led a mission with Jason, Joyce, and Walky to disable the Head Alien's mind-control device. When another of the Head Alien's flunkies destroyed the SEMME-craft he was piloting, Alan disappeared and was assumed to have died, only to reemerge later to train Walky .

His next significant appearance occurred when Sal threatened the city of Denver with the Power Booster Rod. It was here that he revealed himself as an Alien, explaining why he lied to Sal about her Abductee status. As a result, he was temporarily fired from SEMME. It was at this time that Alan's connection with The Cheese was also first revealed: when The Cheese fell in battle, Alan used an emergency telewarp activation to help him escape.

At one point, Alan was kidnapped by the Head Alien for questioning. It is unknown what he revealed at that time, though it was suggested that it included the nature of the upcoming threat and his part in it. Whether this information was what eventually allowed the Head Alien to overtake The Cheese is currently unknown.

During the final battle with the Martians, Alan was thrown by Monkey Master toward The Cheese, and went intangible until he was "inside" it. He then returned to tangibility, forcefully ejecting the Head Alien from The Cheese and destroying his control over the Martians - at the cost of his own life.

Alan was briefly seen in Walky's "Purgatory" shortly thereafter, alongside a number of other fallen Walkyverse characters.

Alan Rees is a professor at Indiana University, teaching (or at least trying to teach) several of the freshman Calculus classes. His schedule is busy enough for him to have two teaching assistants: Jason Chesterfield and Penny.

Professor Rees has only been physically seen in a single strip so far, and even then only from a distance. 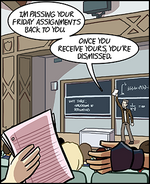 his only doa appearance, from far, so far away...
Community content is available under CC-BY-SA unless otherwise noted.
Advertisement