Walkypedia Wiki
Register
Don't have an account?
Sign In
Advertisement
in: Joyce and Walky!, Dumbing of Age, Characters

Becky MacIntyre is Joyce Brown's best friend in Joyce and Walky! and Dumbing of Age.

Following the wedding of Billie and Danny, Joyce launched a desperate search for a female friend who could serve as a bridesmaid at her own wedding ceremony. After meeting Becky at a church bake sale, Joyce immediately decided that she would her new best friend. Luckily, Becky was happy to play the part - and conveniently enough, ultimately turned out to be Joyce's next-door neighbor.

Though Becky and Joyce have a lot in common (chiefly Jesus, donuts, and an age-inappropriate love of cartoons), Becky's more traditional Christian values often leave Joyce feeling insecure. Initially, Joyce would understate (or outright lie about) her more liberal lifestyle, including the frequency with which she was indulging in noisy pre-marital hanky-panky with Walky. Becky eventually noticed Joyce's behavior and called her on it, telling her that she'd rather people just be honest about themselves.

After a run-in with Sal, Becky became a fully paid-up member of the Sal Walkerton Fan Club. That infatuation lasted even after Sal admitted she was only being nice to Becky to get back at Joyce.

Becky later joined the search party for Walky after he was abducted by Dorothy Keener, and finally participated in the actual wedding ceremony.

Sometime later, Becky gave Walky a toy for his and Joyce's to-be-born son.

At some point during the Soggie invasion, Becky was seen firing a Cap'n Crunch gun into a blob of Soggies while on a motorcycle, with Dina Sarazu at her side.

Becky is Joyce’s best friend and accomplice from back home. Of the pair, she’s the more irreverently tempered, and Joyce sort of lives vicariously through her. Becky loves Joyce more than like anything in the whole world, so she’s a little broken up that she has to go to school somewhere else.

While Joyce was sent out to brave the secular temptations of IU, Becky enrolled at Anderson University, a well-regarded Christian liberal arts university. The two initially stayed in touch via phone, but as the weeks went by, their conversations became less frequent until Becky stopped picking up the phone entirely.

After a long silence, Becky surprised Joyce by unexpectedly showing up on-campus... then surprised her even more by kissing her when the two were finally alone. Becky admitted that while she'd had strong feelings for Joyce for years now, it wasn't until the two of them were separated that she could actually process and understand them. After a shocked Joyce replied she didn't feel the same way, Becky fled.

Shortly thereafter, Joyce caught up with her friend outside of Read Hall, where she discovered the truth: Becky had been removed from Anderson after being caught getting intimate with her roommate, Kaitlin.

Becky then crashed with Joyce for a couple of days, during which time she proclaimed her sexuality from the metaphorical rooftops, received twenty dollars from Billie, got a bangin' new haircut, "fired" Ethan from being Joyce's boyfriend, tried sushi, borrowed some of Sal's clothes, learned of the incident with Ryan, threw a party for Joyce, got kissed by Dina, watched "Frozen" for the first time, and was given Billie's old room. Oh, and she learned some stuff from Dina about dinosaurs and fossils and stuff. Currently, she is officially dating Dina and trying to get a job . 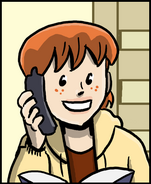 damn I really like her new character design! She looks fabulous.

Community content is available under CC-BY-SA unless otherwise noted.
Advertisement