Start a Wiki
Dumbing of Age is the fifth webcomic created by David Willis, and the first to be set outside of the Walkyverse continuity. Essentially a reboot, it features all of the major players of Walkyverse as they make their way through college, "minus fifteen years of baggage" and the fantastical/sci-fi elements seen in previous comics. [1]

It currently runs seven days a week. In addition to the strip's website, it is also available through the Comic Chameleon mobile app operating on the Android and iOS platforms. 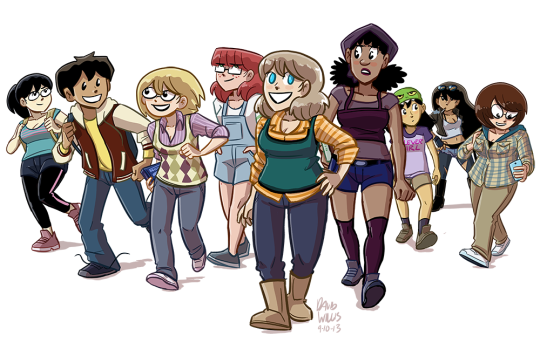 For more detail on individual plots, see the Dumbing of Age storylines page.

Dumbing of Age is currently supported via Patreon. Backers gain access to a number of special bonuses, including:

Four print collections have been released to date.

These collections have also been released through Comixology.

In 2014, David Willis began releasing X-rated - and canon! - Dumbing of Age comics featuring various established couples through adult comics portal Slipshine. To date, five "Pornographiques" have been published, with more planned for the near future:

Other Dumbing of Age merchandise, including prints and shirts, can be purchased through the DoA/Shortpacked! Big Cartel store.

Retrieved from "https://walkypedia.fandom.com/wiki/Dumbing_of_Age?oldid=9529"
Community content is available under CC-BY-SA unless otherwise noted.