Walkypedia Wiki
Register
Don't have an account?
Sign In
in: Characters, Technology, It's Walky!, Dumbing of Age

The Wanderer is a major character in It's Walky!, though he is more commonly known by the irreverent nickname The Cheese due to his Swiss cheese-like exterior. 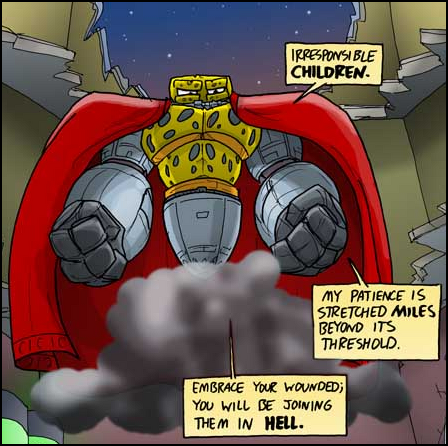 An immensely powerful android created thousands of years ago and galaxies away by persons or lifeforms unknown, The Cheese is animated by the soul of another being.

The first known being to inhabit the Cheese was David, Linda Walkerton's boyfriend, who was accidentally sent back into the android's body by a malfunctioning Martian Resurrection Chamber. At first, David intended to use his newfound powers to restore balance to the universe and reunite himself with Linda, but over millennia, he began to forget - or fail to care about - his original purpose.

The Cheese eventually found his way to modern-day Earth, where he covertly monitored the struggle between the Aliens, SEMME, and the Martian Empire. He only revealed himself after Sal Walkerton got hold of the Power Booster Rod, creating a potential danger to the balance of reality. He injured most of the SEMME agents and personnel present and snapped Sal's knee, but was unable to prevent Sal from using the Rod to drive him away: as the product of an alternate universe, the Rod was immune to the Cheese's powers.

He later reappeared after detecting a large surge of extradimensional energy - in this case, the accidental emergence of the Science Fiction Club from Fans! in the Walkyverse. The Cheese claimed "Right of Salvage" to the newcomers, but was frustrated by the extradimensional magic of a "Hellnostril" controlled by the mysterious Mist. The rift was eventually sealed, but the encounter left the Cheese somewhat shaken.

The Cheese was summoned two more times by Joyce via the Power Booster Rod: first during the JFO's attack on SEMME's headquarters in Denver, and again when Joyce experienced a crisis of faith, leading her to seek out the most powerful being she knew of.

The Cheese next appeared in Canada, lured and then frozen in time by a reality-corrupting beam deployed by the Head Alien. However, the beam's effects were getting more and more unpredictable, and would eventually create a full-blown "continuity suckhole". Racing against time, Joe worked desperately to repair the Cheese, only to find the android suddenly restarting of its own volition. The revived Cheese seemingly destroyed the Head Alien, referring to him as "gone". In reality, the Cheese had now acquired two additional passengers: the soul of Walky, sent back after his death at the hands of the Martians in the near future, had brought the Cheese back to life. The Head Alien, too, had entered the Cheese after being destroyed, though his soul's influence would remain dormant while he fought to establish control over the android.

As the Martian invasion force began its final assault, the Head Alien's soul finally emerged, casting David out of the android body. Armed with his newfound powers, the Head Alien proceeded to take control of the Martian forces and possessed Anti-Head Alien's body as an extension of his own - largely to taunt Sal in an up close and personal fashion.

HA's control of the suit was disrupted when Monkey Master threw an intangible Alan Rees into the Cheese. Upon becoming corporeal again, Alan reset the Cheese's body at the cost of his own life, trapping the Head Alien's soul in the Anti-Head Alien's body. At this point, Sal, red-eyed and angry, drove a spike through him and killed him. (On the plus side, it was how he wanted to go.)

With the Cheese's body seemingly vacant, Joyce, Sal and the other survivors hoped and prayed that Walky had somehow found his way to the Cheese's body. Fortunately, their prayers were answered: Walky-as-Cheese froze the Martian attack, then teleported to retrieve the Power Booster Rod (and Joyce's dog, Daniel) from a warehouse. Unlike the body's previous inhabitants, Walky's Martian DNA allowed him to use the Rod in combination with the Cheese's own powers, wiping out the Martian attack in its entirety.

Walky eventually left the Cheese's body with the hope that a Resurrection Chamber would be able to revive him, though not before writing a letter for Joyce to read in the nine months his own body would take to regrow.

The Cheese's body is immensely powerful in every sense of the word, demonstrating telekinesis, teleportation, reality-warping, and many other powers. Its only known weakness is extradimensional energy - in other words, energy not originating from its own universe. The Cheese is also vulnerable to alien mind-wiping technology, though this only incapacitates the Cheese for a short time. It can be similarly halted if struck by an intangible object.

Though the base power of the Cheese is defined by the android body, the suit's operator plays an important role. The presence of multiple souls within the body can also affect its functions, as was demonstrated during the Martian Invasion when David-as-the-Cheese was unable to permanently stop the Martians.

It is unknown what became of the Cheese's body after Walky left it. Since it never resurfaced, it's safe to say that the body remained inactive and David's soul was no longer operating it.

This Cheese was present during the Head Alien II's invasion of Denver with the Martian Spaceship, in a reality where Walky had married Dorothy and Joyce and Joe were together instead. Sal had betrayed SEMME in order to revive her parents, and the Cheese pointed out that they had no relation to Sal. Later, the Cheese had been infected by HA2's virus, exposing the SEMME team to bits of alternate realities. HA2 had been flung at the Cheese by a spiteful Sal, inadvertently giving him the ability to travel between dimensions.

Like many of the more fantastical elements of It's Walky!, The Cheese is a character featured in the hit animated series Dexter & Monkey Master. His appearance is largely identical to his Walkyverse counterpart, though his cloak now also has holes in it.

Community content is available under CC-BY-SA unless otherwise noted.